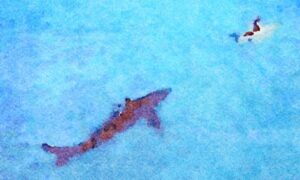 “The swimmer that was attacked by a great white shark at Lovers Point Beach Wednesday morning — 62-year-old Steve Bruemmer — is in fair condition and expected to make a full recovery, according to his doctors at Natividad Medical Center.

Bruemmer was swimming at Lovers Point in Pacific Grove shortly before 11 a.m. Wednesday when he was bitten by the shark. Witnesses saw him go underwater briefly before resurfacing and calling for help.

“The shark bite was unlucky, but after that, I’ve just had so much good luck,” Bruemmer said in a statement released to the media. “The day was so calm and warm and the beach was crowded. There were no waves and there was no chop. So people could hear me yelling ‘help’ from a great distance, including from the Rec Trail, where someone called 911.”

Shark attack at Lovers Point in Pacific Grove on June 22, 2022

This site is funded, produced,  published by and about the
citizens of Pacific Grove, California, USA, 93950. All opinions are ours.
Any similarity to those of the P.G. Government are purely a coincidence.
Copyright 1996-2022
Questions? Reach Us: Pacificgrovecity@gmail.com